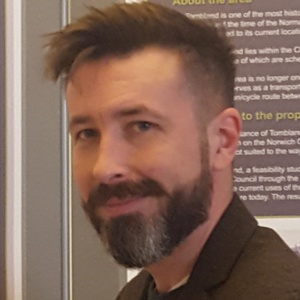 Ben Price was the Green Party candidate in the constituency of South Norfolk in the UK Parliament elections . They got 2,499 votes. Our volunteers have been adding information on Ben Price - here's everything we know so far!

Ben has represented Thorpe Hamlet ward for the past seven years and is keen to continue to do so. He has been a member of the Licensing Committee since first elected, instrumental in developing the Stakeholders' Forum, a Green Party initiative with the aim of improving the late-night economy. Having completed a local investigation and reporting his findings to the Government Minister for Licensing at Westminster, he led Norwich City Council’s introduction of a Cumulative Impact Policy, which capped the number of bars in the Late Night Activity Zone.

Ben has been involved with a number of community initiatives. Where drug dealing and prostitution were a major problem, he helped residents work with the council and the police to make a run-down park known as Old Library Wood, into a safe and friendly community space. He organised a river tidy on the River Wensum, removing rubbish and helping to highlight plastic pollution and the importance of the waterway. He worked with Thorpe Hamlet residents to build a successful campaign to oppose the proposed construction of a straw-burning incinerator power station known as Generation Park.

He now chairs the Safer Neighbourhood Action Panel (SNAP) for the city centre and Thorpe Hamlet; this is a liaison meeting between local people and the community policing team, that sets the police’s quarterly neighbourhood priorities. Its aim is to reduce anti-social behaviour, drug dealing and prostitution in the city.

At City Hall, Ben chairs the Audit committee, monitoring the way the council carries out its business. Here he has focused on governance, transparency and risk management, challenging the Labouur administration on its investment strategy, introducing training for members of the committee to improve overall performance and directing investigations into the governance of the council’s commercial company through the work of the internal audit team.

As Vice Chair of the Mousehold Conservators, Ben’s spent the last two years working alongside council officers on the newly-agreed ten-year vision for Mousehold Heath, helping to create a focus on biodiversity and community participation.

Ben has raised a number of issues at council level, including the introduction of council-owned electric car charging points in St Giles Car park to be made available for public use; road infrastructure improvements, to improve air quality along the ring road and outside of schools in his Thorpe Hamlet ward; better enforcement of idling vehicles; supporting biodiversity through calling for the reinstatement of the tree planting budget and challenging shrub removals. He has also repeatedly demanded 20Mph speed restrictions around the schools and residential roads across Thorpe Hamlet.

A Gardener by profession and qualified Master Composter, he lives with his wife and their two children within the old city walls. A keen cyclist, he enjoys kayaking on the Wensum and attending football matches.

This statement was added by Ben Price, their team, or by a Democracy Club volunteer, based on information published by the candidate elsewhere.

If you can add information that should be on this page - such as Ben Price's CV - please use our crowdsourcing website to add it.