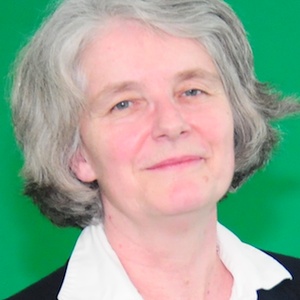 Fiona Radic was the Green Party candidate in Eastern in the European Parliament (UK) elections. Our volunteers have been adding information on Fiona Radic - here's everything we know so far!

I am thrilled to be standing in May 2019 for election in an unexpected European election with a simply outstanding team of candidates, any of whom would make a wonderful Member of the European Parliament.

We want to offer the East an opportunity to
-confront and tackle climate chaos
-protect the beautiful land we walk on and depend upon for our sustenance
-localise our economies & reduce our supply chains and our food and commuting mileages
-reform government (yes: European as well). Democratic deficiencies open up cracks and we have crises of trust. So while people feel that they are being exposed to economic, climatic and political threats, voters are furious that their wishes as expressed at the ballot box are disregarded when they can see that politicians have no choice but to work together and across party lines.

Fiona Radic stood for parliament in 2010 and celebrated a decade of campaigning with the Green Party by standing again in 2017’s snap election. She helped manage the successful Green Mayor Campaign in which Julie Howell kept her deposit, polling over 9% of first preference votes in Peterborough and proving strong core support in a city with strong environmental ambition. Julie Howell was subsequently elected to the city council in 2018 as Peterborough’s first Green city councillor.

Fiona campaigned to remain in the EU during the referendum and stood for election to the European Parliament in 2014. “My family is international in its connections and outlook. The EU referendum was divisive and profoundly destructive. It caused alarm and dismay at a time of unprecedented international economic stress and political upheaval. I stand firmly with those whose rights and relationships - personal and business - are being overlooked by the state. We are not bargaining chips. It is one thing for the state to assert its right to govern itself (even if that right was never endangered). It is entirely another to put our current economic system at risk, and to threaten family life. If we are to leave the EU, let us be sure to make that a sensible and constructive process and make full use of Green Party thinking on local decision making and empowerment.

Fiona has campaigned on the NHS, on transport, planning and infrastructure, nuclear power and Trident, air quality, green spaces, social justice and equality, maternity services and housing. Fiona has worked in universities, in companies massive and tiny in the financial and telecoms sectors and also as an unpaid activist and volunteer.

This statement was added by Fiona Radic, their team, or by a Democracy Club volunteer, based on information published by the candidate elsewhere.

Fiona Radic's local party is the Green Party of England and Wales.

You can meet candidates and question them at local hustings. Here are hustings where Fiona Radic may be appearing.

If you can add information that should be on this page - such as Fiona Radic's CV - please use our crowdsourcing website to add it.