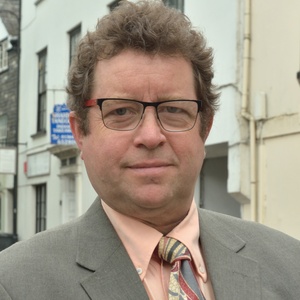 Andy Williamson was the Green Party candidate in Central Devon in the UK Parliament elections . They got 2,833 votes. Our volunteers have been adding information on Andy Williamson - here's everything we know so far!

I spent some time attempting to persuade the local Labour and Lib Dem parties to agree to stand a single 'Unity' candidate in the Central Devon seat. For more information about this, see: https://www.facebook.com/AndyWilliamsonGreenParty/posts/1886848791571912

Both other parties ultimately refused to do this, so I am standing for the Green Party. In Central Devon, there's no party which can genuinely claim to be poised as a serious threat to the Conservative candidate, Mel Stride. So unlike some constituencies where the Green Party has taken a careful and principled decision to stand down in order to support a progressive candidate (who supports proportional representation) from one of the other parties, who does have a clear chance of winning that seat, in Central Devon this would be a futile gesture.

Under ‘normal’ circumstances, I would agree with those who say that everyone should have the opportunity to cast their vote for the candidate or party which most closely reflects what they want to see happen in this country. It’s why I stood here in 2015 for the Green Party, knowing that the best I could hope for was to increase the size of the Green vote, and bring more attention to our great policies. But this election is not a ‘normal’ one. It is being held at a time when our country is in a state of turmoil and division beyond anything I could have imagined. The governing party has faced well-founded allegations of criminal electoral malpractice in the last election in 20 constituencies – a greater number than its parliamentary majority. It is now dealing with Brexit – the consequence of incompetent legislation and frankly fraudulent campaigns – which has now replaced the real important issues of our times (eg climate change and the global refugee crisis), and which risks breaking up the countries of the United Kingdom. All for what? So David Cameron could win a few votes from UKIP?
The Conservative Party has managed to govern this country on its own since 2015 having won just 37% of the popular vote, from 24% of the electorate. Never mind ‘strong and stable’ – in that time it has lurched from one disaster to another, endangering our education system, our NHS, our ‘United’ Kingdom and the respect we’ve always had from the rest of Europe and the rest of the World. We had an opportunity here to make a stand against that by creating a clear choice, where normally there would not be one. Vote Conservative or vote for something different. As that clear choice doesn't exist, and even tactical voting looks like it will inevitably be split between Labour and Lib Dem here, I urge people in Central Devon to vote with their hearts for the party who best represents your views and hopes for the future of this country.

This statement was added by Andy Williamson, their team, or by a Democracy Club volunteer, based on information published by the candidate elsewhere.