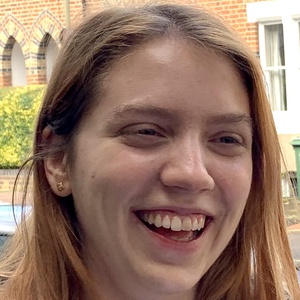 Rosie Sourbut was the Labour Party candidate in Oxford West and Abingdon in the UK Parliament elections . They got 4,258 votes. Our volunteers have been adding information on Rosie Sourbut - here's everything we know so far!

The party's candidate page for this person
https://vote.labour.org.uk/rosie-sourbut
Email
rosie4oxwab@gmail.com

Originally from Bath, Rosie has lived in Jericho for the last three years. She is a local community campaigner who has campaigned on a variety of issues across Oxfordshire, including boosting women’s and disabled people's participation in politics and tackling violence against women and period poverty. She is a campaigner against food poverty which has sharply risen since 2010, and has volunteered with local Oxford foodbanks, as well as researching the impact of the Tories’ cruel roll-out of Universal Credit and food poverty at Oxford’s Social Policy Department.She co-founded the Oxford Climate Policy Forum and has previously worked for a Hungarian charity improving environmental policy at an EU level.

Rosie promises to provide a fresh start for Oxford West & Abingdon, bringing the real change our area and country needs.

For me, politics is about fairness. Back in 2015, during the height of Coalition austerity, I started volunteering at a local foodbank.

I was horrified that in this country it was becoming harder for families to feed their children. It is through this experience that I learnt how significant a Labour Government with a programme of justice and equality can be for our communities.

This crisis in our society has got worse and worse. In 2010, the Trussell Trust gave out 41,000 emergency food parcels – in 2019 over 1.6 million parcels were handed out.

It is easy to look around our community and see the impact of austerity – foodbanks have opened across the constituency, children’s centres have closed, and people are struggling with housing and living costs that are some of the highest in Britain.

I am standing in this election because I couldn’t stand by and see our community continue to suffer under the neglectful and toxic austerity politics of the Tories and Lib Dems.

I have led local campaigns on tackling violence against women. I have seen how vital services for women have been slashed. During my research on the devastating impact of Universal Credit, I spent hours interviewing hungry children and disabled people with just £13 a month left after rent and bills. Things don’t have to be this way.

Austerity was a political choice. Unlike the Tories and Lib Dems, Labour will instead choose to invest.

A Labour Government means real change: proper investment in our public services, an end to poverty and austerity and real action on the climate crisis - so that everyone in Oxford West & Abingdon can flourish.

Real change is possible if we work together. This became very clear to me whilst working for a biodiversity charity in Hungary on environmental policy at an EU level.

Big, international issues like the climate crisis can only be tackled through co-operation. This is why Boris Johnson’s pursuit of an extreme Brexit is so damaging – not only would it mean significant new trade barriers with Europe but it goes so far as to sever almost all our ties with some of our closest international partners. This is reckless and must be rejected.

Brexit as an issue has been hugely divisive. We need to bring people together. We can’t just pretend the referendum in 2016 never happened as the Lib Dems are undemocratically (and unrealistically) proposing.

I am proud that Labour trusts the people to have the final say, between a credible deal that protect jobs, workers’ rights and environmental protections and remaining a member of the EU. I am clear that in that vote I will be campaigning to ‘Remain’, as it is the best deal for Britain.

The Climate Crisis needs to be everyone’s first priority. It’s why I co-founded the Oxford Climate Policy Forum.

I’m proud to be standing for a party which is offering the action that we desperately need. Labour is the only party in Oxford West & Abingdon proposing a credible and socially just plan to decarbonise our economy by 2030 and create a million new, clean jobs through a transformative Green New Deal.

The choice in Oxford West & Abingdon is clear: If you want an end to the cuts, if you want investment in our community and its services, and if you want real action on climate change you have to vote Labour.

Neither the Tories nor the Lib Dems have committed to ending austerity. Neither of them has a plan to decarbonise until 2045. This is far too late for our planet. Only Labour will deliver a fairer future for all. For real change, vote Labour on December 12th.

This statement was added by Rosie Sourbut, their team, or by a Democracy Club volunteer, based on information published by the candidate elsewhere.

You can meet candidates and question them at local hustings. Here are hustings where Rosie Sourbut may be appearing.

If you can add information that should be on this page - such as Rosie Sourbut's CV, homepage - please use our crowdsourcing website to add it.