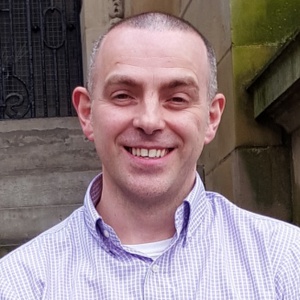 Garry Kitchin was the Pirate Party UK candidate in Batley West in the Kirklees local election. Our volunteers have been adding information on Garry Kitchin - here's everything we know so far!

I have lived in the ward since 2007, and I am married with two children.
Professionally I work for a company that manufactures automotive parts as a Quality Engineer.

So what is the Pirate Party?

1. Our society is built upon the sharing of knowledge, ideas and culture. It is furthered by freedom of thought and expression, and protected by the rule of law. The Pirate Party exists to ensure the preservation and development of these foundations.
2. Human dignity is inviolable. Each of us has a right to life and to live, to freedom of thought and self-determination, and to participate in society.
3. Everyone is equal under the law. We all have a say in the structure and processes of governance and the right to know what is done on our behalf.
4. Respect for our private and family life by government and society is fundamental and we all have freedom of choice in our associations and relationships.
5. To be free to participate in society everyone must have access to justice, education and such services and infrastructure required for life within it.
6. To ensure the security of our society it is the responsibility of the government to provide for its defence, the mechanisms of justice and such services and infrastructure required to meet its needs.
7. We will act on the basis of evidence, with the consent of society through democracy, in the interests of all.

If elected to be your representative these principles would guide the decisions made on your behalf.

Why the Pirate Party now?

Throughout human history technological changes have changed society. The advancements that led to the Industrial Revolution brought people into the towns and cities from the countryside. The nature of work and society was fractured and reformed. While wealth was generated, the lives of ordinary people were hard. It took many decades of reform and social change for workers to see a real improvement in their lives.

We in the middle a digital revolution. The rapid growth of computers, technology and big data can be seen everywhere. This cannot be held back and offer huge potential benefits, yet we see drawbacks too.

What does privacy mean when so much information about us is stored in cyberspace? What controls do we have to stop our data being abused? What constitutes our human rights in a digital world?

These questions need to be answered, and require a national debate and political solution. It cannot be left to Google or Apple to decide what is right for the people.
I believe that fundamentally:

a) People have an inherent right to privacy, including online.
b) The freedom of speech must be preserved.
c) Surveillance by the state is only valid when specific intelligence that suggests serious crimes are likely to occur is available. Surveillance must only be permitted when approved by a judicial process, and any information gathered that is not used in a prosecution should be deleted.
d) The punishment for the abuse of personal data should be severe enough to act as a deterrent and exceed and commercial benefits for that abuse.

Our democracy is also analogue in a digital world. Our parliament and electoral system belong to the nineteenth century, not the twenty first. The use of technology and new information systems can transform the richness of political debate and engage the electorate much more. It can bring about a new transparency.

So what are my local policies?

If elected these are my priorities.

The residents of Batley West have put up with behaviour that really degrades the quality of life. This includes vandalism, noise, illegal motorbikes and quad bikes. People living among this often feel too scared to come forwards with information that the authorities need to bring the offenders to book.
I would provide that link so people could come forwards easily, and try to pull all the stakeholders together — the Police, the Council, residents and the schools. Solving this is a team effort

We have two children on the autistic spectrum, and it has been a long tough road. Support for families is not good, with long delays for assessment and getting educational support, and limited services to provide the support that parents of SEN children need.

a) Shorter times for initial diagnosis.
b) A rapid deployment of support for children’s educational needs.
c) Improved overall family support, to help alleviate the stresses felt by carers.

Enriching the relationship between councillor and residents is vital for better engagement. Fortunately, modern technology can easily facilitate this in two ways:

1) As Councillor I would post regular feedback about the issues going on. This would enable residents to know work done on their behalf. Regular feedback electronically is very easy to do, but for the benefit of those not online I would produce a newsletter for the whole of Batley West several times a year.
2) I would consult widely on major issues, so the decisions made in the council chamber are informed by the views of real people. This would be in the form of surveys, for example.

Council budgets have been slashed in Kirklees, as the grant from central government is reduced. No amount of Council Tax rises can make up the short fall.Therefore, improvement to services cannot wait for increases in future funding, but through the reconfiguration of services — doing things differently and smarter.
My professional life involves ‘continuous improvement’, so I would bring this experience to seeing where improvements could be made without increasing the cost of service delivery. More bang for Council Tax payers’ buck.

Time for a change

I believe it is time to shake things up, and get away from the pantomime of two-party Punch and Judy politics. I want to be a strong and independent voice for Batley West, working for people.
In the council chamber my aim is the best interests of residents. That means not making formal deals or pacts with other parties or groups, but simply voting motion by motion with the interests of Batley West being paramount, in accordance with the seven key principles outlined above.
I can be contacted if anyone has any questions for me, and ask that if you support my principles, please cast your vote for the Pirate Party on the 3rd May 2018.

The Pirate Party in the UK is a fledgling political party. It has fielded a few candidates in European and National elections, but like most small parties it is significantly constrained by the UK electoral system. Despite this, the Pirate Party has started to poll alongside major parties and is looking to build support from the grassroots. The party stood 10 candidates in the June 2017 General Election, and continually polls higher at each election.
Find out more about the UK Pirate Party at https://pirateparty.org.uk/ or contact campaigns@pirateparty.org.uk

This statement was added by Garry Kitchin, their team, or by a Democracy Club volunteer, based on information published by the candidate elsewhere.

You can meet candidates and question them at local hustings. Here are hustings where Garry Kitchin may be appearing.

If you can add information that should be on this page - such as Garry Kitchin's CV, homepage - please use our crowdsourcing website to add it.