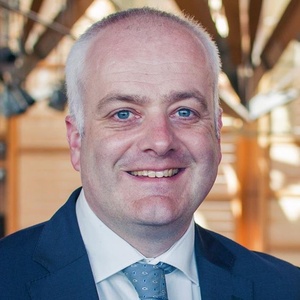 Mark Ruskell is the Scottish Green Party candidate in Mid Scotland and Fife in the Scottish Parliament elections (Regions). Our volunteers have been adding information on Mark Ruskell - here's everything we know so far!

When Mark was first in Parliament in 2003 he introduced the first-ever legislative proposal on climate change targets. This time round his ambition has only grown. Mark has got millions of pounds put into creating marine protected areas, a citizens assembly on climate change set up, and stopped the destruction of Scotland’s kelp forests. He is also a keen cyclist and advocate for road safety, and led a campaign to change the default speed limit In urban areas to 20mph. Mark has worked closely with communities securing millions of pounds to develop proposals for new rail stations, campaigning to stop developments and holding corporations such as Exxon-Mobil and Edinburgh Airport to account.

This statement was added by Mark Ruskell, their team, or by a Democracy Club volunteer, based on information published by the candidate elsewhere.

If you can add information that should be on this page - such as Mark Ruskell's CV, homepage - please use our crowdsourcing website to add it.