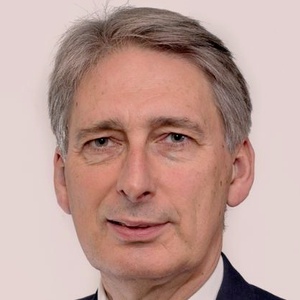 Philip Hammond was the Conservative and Unionist Party candidate in Runnymede and Weybridge in the 2017 General Election. Our volunteers have been adding information on Philip Hammond - here's everything we know so far!

Home page
http://www.runnymedeweybridgeconservatives.com/
The party's candidate page for this person
https://www.conservatives.com/OurTeam/Prospective_Parliamentary_Candidates/Hammond_Philip.aspx
We don't know Philip Hammond's email address. Can you add it?

Philip Hammond, Baron Hammond of Runnymede, is a British former Conservative Party politician who was Chancellor of the Exchequer from 2016 to 2019 under Prime Minister Theresa May. He was the Member of Parliament (MP) for Runnymede and Weybridge from 1997 to 2019. Hammond had the Conservative whip removed in September 2019 for voting against Boris Johnson's government and subsequently sat as an independent MP, though he remains a member of the party. He did not stand for re-election in the December general election.