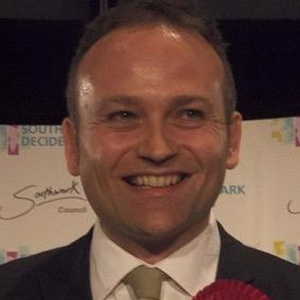 Neil Coyle was the Labour Party candidate in the constituency of Bermondsey and Old Southwark in the UK Parliament elections. They were elected with 31,723 votes. Our volunteers have been adding information on Neil Coyle - here's everything we know so far!

Neil was born in Luton, December 1978 and attended Wenlock, Ashcroft and Bedford schools and Hull University. He lives in Newington ward, SE17 with his wife Sarah and previously lived in Grange and Cathedrals wards in SE1.
Neil worked at the Government equality commission, 2003-07, finishing as Policy Manager for health and social care. He was Head of Policy at the National Centre for Independent Living, 2007-09, Director of Policy at Disability Alliance 2009-12 and Director of Policy and Campaigns at DRUK, 2012-13. He worked for shadow Work and Pensions team member Kate Green MP. Neil became Newington ward Councillor in 2010, was Southwark’s Deputy Cabinet member for Welfare, 2011-13 and Labour MP for Bermondsey and Old Southwark May 2015 – May 2017.
Neil helped establish a local Hardship Fund to support our most disadvantaged friends and neighbours. He also helped found the Walworth Society – ensuring local people get a greater voice in planning and regeneration issues in particular, but also providing greater voice and focus at local level. He is a Trustee for the North Southwark Environment Trust – helping fund local educational and environmental projects across the north of Southwark, including the Alf Salter replacement statue campaign. Neil has also worked to establish new tenants’ associations to ensure stronger, local voice.
www.boslabour.org.uk
twitter.com/coyleneil

This statement was added by Neil Coyle, their team, or by a Democracy Club volunteer, based on information published by the candidate elsewhere.

Neil Coyle is a British politician serving as the Member of Parliament (MP) for Bermondsey and Old Southwark since 2015. A member of the Labour Party, he previously was elected to Southwark London Borough Council in 2010.

You can meet candidates and question them at local hustings. Here are hustings where Neil Coyle may be appearing.

If you can add information that should be on this page - such as Neil Coyle's CV - please use our crowdsourcing website to add it.

If you've received election leaflets from Neil Coyle, please take a photo of them and upload them to ElectionLeaflets.org